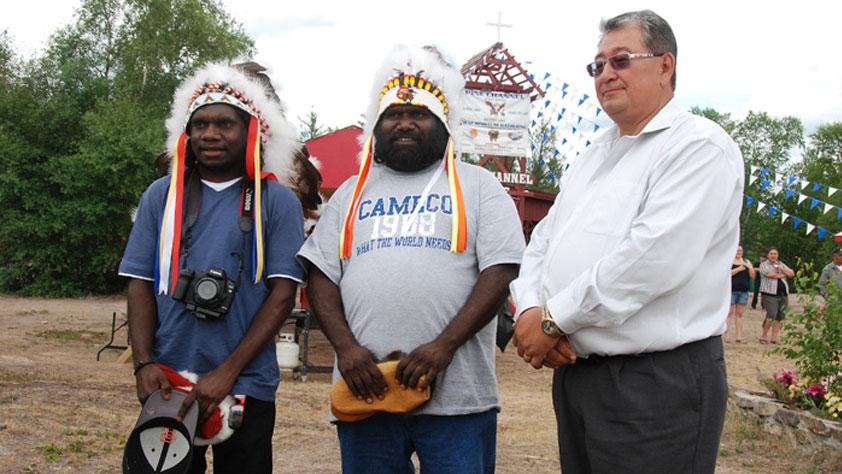 A group of thirteen Martu people visited the Athabasca Basin in Saskatchewan, Canada to learn about Cameco’s uranium mining practices there.

Some unusual faces were seen in northern Saskatchewan in early July (2011). Guests of honour at Pine Channel, the annual Catholic pilgrimage held on an island between Stony Rapids and Fond du Lac, included 13 people from the other side of the world.

It took them something like 14 flights and almost 24 hours in the air to get there.

The group comes from the Pilbara sandy desert area of Western Australia, where Cameco is considering building its Kintyre uranium mine.

They represented the Western Desert Lands Aboriginal Corporation (WDLAC), a group to help the Martu (pronounced Mardu) people of Western Australia to manage their Native Lands which is an area of 1000 km square with the Rudall River National Park in the middle. Two people, a man and a woman, represented each of six language groups.

Curtis Taylor, the first Martu to ever, to do a university degree (in media) was along to photograph and video the trip to show folks back home.

The Martu were in Saskatchewan as guests of Cameco, which is potentially developing the low-grade Kintyre uranium mine on Martu lands.

They visited the Rabbit Lake mine, and were impressed.

"We met people who have worked for Cameco for some time, up to 36 years, and they are still there," said WDLAC chair Billy "Butler" Landy. "I would like to see our open pit mine managed as well as Rabbit Lake. We also saw revegetation, the water treatment plant converting effluent to normal water, and ducks swimming nearby.

"We went right through the mill, were standing on top of the tanks and we are still here," he said. "I think uranium mining can be managed".

Landy said the area around the proposed mine at Kintyre is hilly and sandy with only a small river in the wet season.

"The Martu expect jobs from the operation, although Canadian First Nations groups are still better off since they have negotiated business contracts and own airlines. But if it can happen here, it can happen where we are.

"This is the starting point, and dealing with the companies is the only way we can survive - we can't live as nomads today. Everyone who wants to come on our land has to come and talk to us. There's a waiting list.

"We want our people to have a better future and live in today's world, yet still retain their culture. Our culture and our languages still come first," he said. 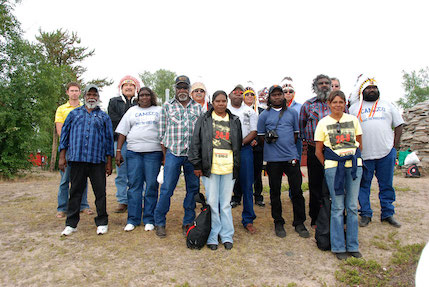 Landy is impressed with Cameco. "They brought us all the way here to see their mine, and they are helping us," he said. "We can see for ourselves what a good story this is".

"This is a beautiful country and people. Where there used to be (and still is) hunting and gathering, there is a mine, yet people are still able to live their traditional lives, he said.

The Martu are still waiting for promises made by the government years ago to be fulfilled.

"It likely won't happen in my lifetime," says the 51-year-old. "We fought hard for more than 20 years to have our rights recognized, and we finally got native title in 2002," says Samson. "The only place we don't have rights is the national park.

This history of broken promises has made it hard to trust others, he says.

"With title, we have the basis to make deals with the mining companies".

Samson said besides employment, the Martu will be working on business development to get contracts such as catering with Cameco and others. "We came to Canada to see what other Aboriginal groups have actually done". 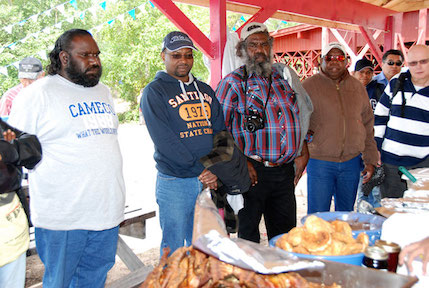 The Martu group enjoyed some traditional cuisine at Pine Channel. There was smoked whitefish, fried fish, moose meat, traditional soups and stews, bannock, caribou including parts of the head and delicacies like tongue and kidneys.

The alternative was the "other traditional food" – hamburgers and hot dogs donated and grilled up by representatives of Cameco and AREVA.

Cameco's Sean Willy and Freddie Throassie, company-community liaison person for Black Lake, also spoke. They have both visited the Martu in their home territory.

Lynn Dunn and James Berringal spoke on behalf of the Martu in appreciation of the warm welcome, recognizing the similarities in culture.

by Gill Gracie, publisher and editor of Opportunity North, a business magazine published in La Ronge, Saskatchewan, Canada. Gill attended the annual gathering of the Dene First Nations people in Pine Channel in the Athabasca Basin which is home to five uranium operations, including four operated by Cameco Corporation. This is her account of meeting with the Martu people from the Pilbara area of Western Australia. The Martu visitors were special guests of the Dene at Pine Channel as part of a 10-day visit to Saskatchewan, hosted by Cameco.